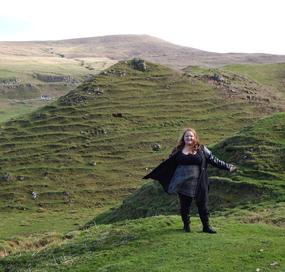 Courtney grew up having incredible exposure to the spirit realm within her Connecticut childhood home. As she entered her teenage years the spirit activity at her home increased. Commensurately Courtney's ability to make contact with the spirits also increased. By the age of 15 her home had become the object of a paranormal investigation from the Warren family and her abilities had become glaringly apparent to her and her family during this tumultuous time. As Courtney entered college years and early 20's she put her gifts on the back burner -- a bit fearful and intimidated by them. Her spirit guides never gave up on her and soon she discovered that she was not meant to ignore those who had passed on but to help them, those who love them and to learn from them. Courtney left her nine to five and opened up a haunted history tour business in Mystic, Connecticut where she continues to run ghost tours in downtown Mystic and an ancient burying ground. Her first book, "Haunted Mystic" was released with The History Press in 2014 and her next book "Revolutionary War Ghosts of Connecticut" will be released in Spring of 2016. Her job has brought her into many haunted locations and Courtney and her husband also investigate activity in other people's homes using Courtney's spirit communication abilities and various other forms of technological tools. Through this spiritual journey Courtney continued to make contact with spirits around her as she traveled and began to learn from various esteemed mediums how she could provide readings and convey messages from those on the other side to those her on earth via her mediumship. After much learning and practice utilizing cards and also spirit channeling Courtney began providing readings. Courtney's roots are of the Celtic Scotch-Irish tradition and through ancestral forms of seeing, Courtney has found her niche and utilizes old tradition in communicating. Her mediumship has become iconic for the prior note-taking before meeting a client and the tea leaf readings are unique to her Celtic past. Courtney's psychic and mediumship abilities would be categorized as either an empathic medium or a physical medium -- often referred to as a spirit medium. (All mediums inherently would be considered psychics as well). Courtney is able to see, hear and feel the spirits in an area or around a person. The sensitivity to communicate with spirit has been passed down through generations. Courtney can direct channel those who have passed on, read those who are around a person to include their guides and angels and also provide card readings and tea leaf readings that give great insight regarding life questions or situations. Courtney is available for gallery readings, private parties, private one on one readings, house readings and more. Please contact Courtney here for more details.